Feature engineering and data wrangling are key skills for a data scientist. Learn how to accelerate your R coding to deliver more, and better, features.

Earlier this month I had the privilege of traveling to Amsterdam to teach a great group of folks data science. As is so often the case, I felt I learned as much from the students as they learned from me. For example, one of the students asked for some R programming assistance in the area of data wrangling and feature engineering. The scenario in question really intrigued me. I knew how I could solve the problem using traditional non-functional programming techniques (e.g., using for loops), but I was looking for something more elegant.

In the hotel that evening I fired up RStudio and started noodling on the problem using my current go-to solution for data wrangling and feature engineering in R – the mighty dplyr package. I had so much fun working through the scenario, here’s some example code from the video showing dplyr in action.

Now compare the above elegant (if I do say so myself ;-)) code with the following code from my series:

In our Bootcamp we spend a lot of time emphasizing that in the bulk of scenarios a Data Scientist is best served by focusing their time on Data Wrangling and (most importantly) Feature Engineering. So often quality Feature Engineering trumps everything else – algorithm selection, hyperparameter tuning, blending, etc. My work on this video series is aligned to our teachings on the importance of Feature Engineering. Hopefully folks get as much out of my new series as I am getting out of making it.

Here is a cheat sheet: 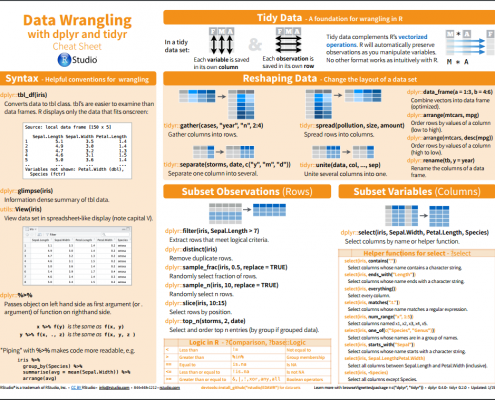