Azure Machine Learning- Predicting the Value of Your House

Azure Machine Learning- Predicting the Value of Your House

Learn how companies like Zillow predict the value of your home. Build a predictive model that estimates the real estate sales price of a house.

Ames housing dataset includes 81 features and 1460 observations. Each observation represents the sale of a home and each feature is an attribute describing the house or the circumstance of the sale.

A full copy of this experiment has been posted to the Cortana Intelligence Gallery.Go
to the link and click on “open in Studio.”

Begin by identifying features (columns) that add little-to-no value for predictive modeling. These columns will be dropped using the “select columns from dataset” module.

The following columns were chosen to be “excluded” from the dataset:

These  low quality features were removed to improve the model’s performance. Low quality includes lack of representative categories, too many missing values, or noisy features.

We must now define which values are non-continuous by casting them as categorical. Mathematical approaches for continuous and non-continuous values differ greatly. Nominal categorical features were identified and cast to categorical data types using the meta data editor to ensure proper mathematical treatment by the machine learning algorithm.

The first edit metadata module will cast all strings. The column “MSSubClass” uses numeric integer codes to represent the type of building the house is, and therefore should not be treated as a continuous numeric value but rather a categorical feature.We will use another metadata editor to cast it into a category.

Most algorithms are unable to account for missing values and some treat it inconsistently from others. To address this, we must make sure our dataset contains no missing, “null,” or “NA” values.

Replacement of missing values is the most versatile and preferred method because it allows us to keep our data. It also minimizes collateral damage to other columns as a result of one cell’s bad behavior. In replacement, numerical values can easily be replaced with statistical values such as mean, median, or mode. While categories can be commonly dealt with by replacing with the mode or a separate categorical value for unknowns.

For simplicity, all categorical missing values were cleaned with the mode and all numeric features were cleaned using the median. To further improve a model’s performance, custom cleaning functions should be tried and implemented on each individual feature rather than a blanket transformation of all columns.

Not every feature in its current form is expected to contain predictive value to the model, and may mislead or add noise to the model. To filter these out we will perform a Pearson correlation to test all features against the response class (sales price) as a quick measure of their predictive strength, only picking the top X strongest features from this method, the remaining features will be left behind. This number can be tuned for further model performance increases.

First, we must identify what kind of machine learning problem this is: classification, regression, clustering, etc. Since the response class (sales price) is a continuous numeric value, we can tell that it is a regression problem. We will use a linear regression model with regularization to reduce over-fitting of the model. 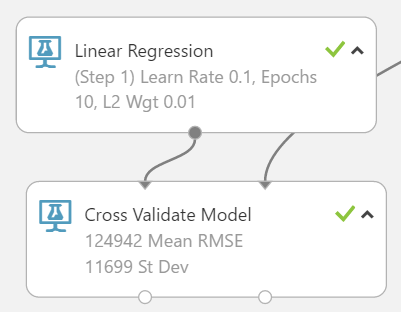 This experiment will build a regression model which minimizes mean RMSE of the cross validation results with the lowest variance possible(but also consider bias-variance trade-offs).

The algorithm parameters that yielded the best results will be the one that is shipped. The best algorithm (the last one) will be retrained using 100% of the data since cross validation leaves 10% out each time for validation.

Feature engineering was entirely left out of this experiment. Try engineering more features from the existing dataset to see if the model will improve. Some columns that were originally dropped may become useful when combined with other features. For example try bucketing the years in which the house was built by decade. Clustering the data may also yield some hidden insights.